Fentanyl Test Strips Empower People And Save Lives—So Why Aren't They More Widespread? 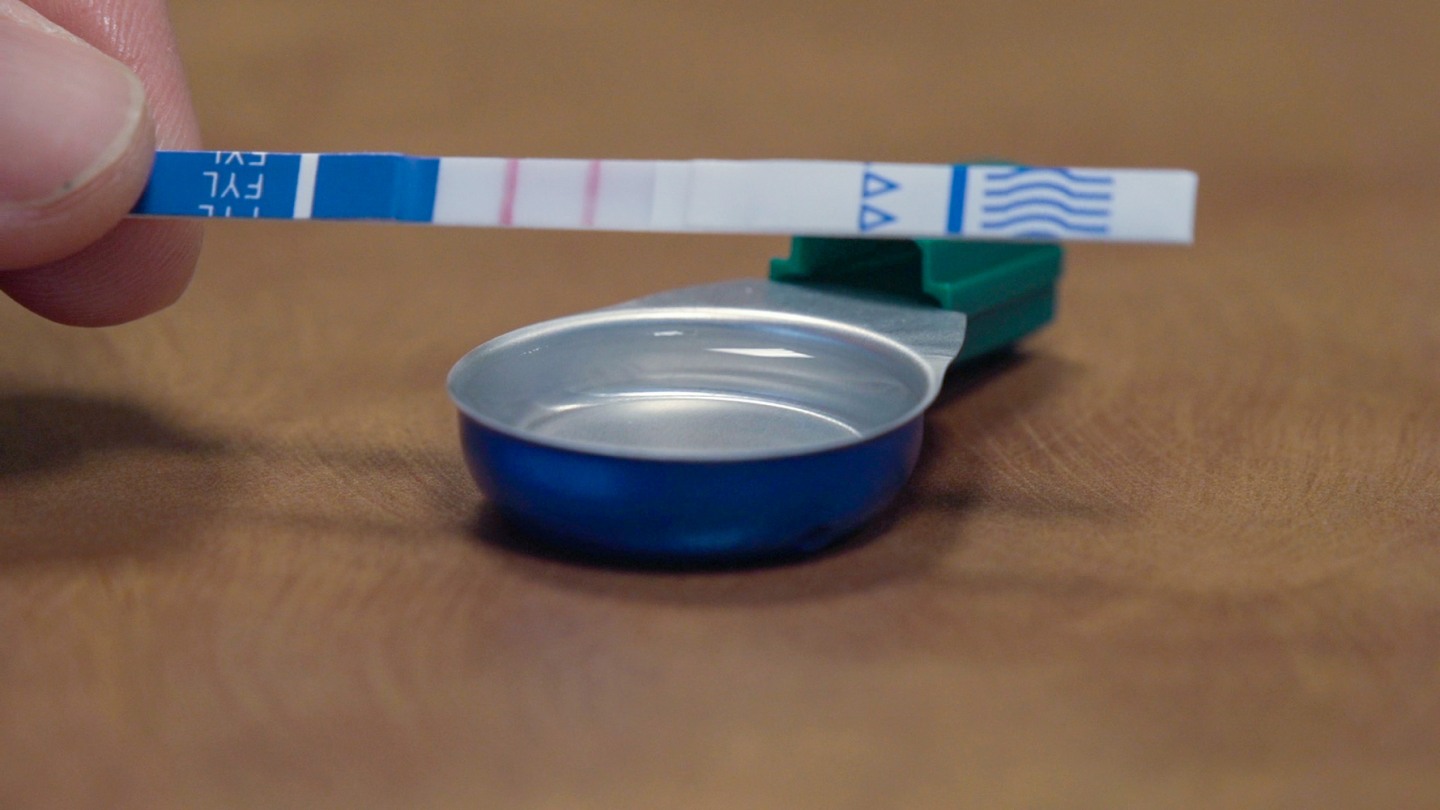 Fentanyl test strips (FTS) are a simple, inexpensive, and evidence-based method of averting drug overdose. FTS are small strips of paper that can detect the presence of fentanyl in any drug batch—pills, powder, or injectables. This tool might be lifesaving for the teenager experimenting for the first time, the individual in the throes of a severe opioid use disorder, the concert-goer looking for a trip, the person using a preferred substance obtained from a new source, or the individual years into recovery. FTS also support the dignity and well-being of people who use drugs (PWUD), enabling them to make educated decisions about their safety.

And yet after years of press and discussions of the strips’ utility, FTS aren’t as widely available as one would expect them to be. It is time to take a more critical look at the importance of destigmatizing this tool and increasing its distribution and availability, while highlighting the grave risks in not doing so.

Empowerment In A Test Strip

Fentanyl, a synthetic opioid 50 to 100 times more powerful than morphine, is commonly found in unregulated drugs, as it is cheap to make and easily mixed or “cut” into drugs. It can be found in heroin or cocaine or formed into “pills” that are sold on the street in the guise of other substances such as MDMA, alprazolam, oxycodone, and others. Because of this, many users are unaware of the composition of drug they are taking or whether it contains traces of fentanyl. This lack of knowledge can be deadly; as we’ll discuss later, fentanyl is responsible for an increasing number of drug overdoses.

Since their creation in 2011 by the biotech company BTNX, FTS have been distributed mainly at harm-reduction sites, such as needle and syringe programs, or through a distributor’s website, but they could be sold at any bodega or dollar store. They are inexpensive ($1 each), simple to use, and can be carried in a wallet or purse. The single-use strips work like other over-the-counter testing products: The user dips the strip into water containing a small amount of well-mixed drug residue and waits a few minutes for the result. The appearance of a single line signifies the presence of fentanyl or fentanyl analogues such as acetylfentanyl, and two red lines signifies its absence.

By testing a drug batch with a single fentanyl test strip, the user is provided valuable information that can best support that user’s unique situation: The user can choose to use a different batch, use less of the current batch, use in the presence of others, or make sure naloxone (an opioid reversal agent) is on hand. The results can also provide insight into the trustworthiness of a new dealer, which might inform choices to avoid future risk or foster caution among the user’s peers. In this case, greater knowledge means greater power. Although the strips do not provide information on the exact amount of fentanyl present, testing can provide enough time, space, and information for a user to contemplate the options. This alone can support a greater sense of empowerment over one’s health, thereby prompting safer behaviors and practices. For those who are in remission or at risk due to an active substance use disorder, the empowerment afforded by FTS can lead to an improved sense of agency and therefore self-worth, which could mitigate risks and facilitate progress on their path toward recovery.

Yet, the pervasive stigma surrounding PWUD has created barriers around FTS and other harm-reduction tools. Negative perceptions of PWUD are fueled by a lack of compassionate understanding of why individuals would use drugs in the first place, which in turn contributes to the belief that they lack a moral compass, can’t be trusted, or don’t care about their own well-being. These sentiments are found in our immediate communities, but they also exist in some of the highest levels of our government. In a 2018 blog post that has since been removed from the Substance Abuse and Mental Health Services Administration (SAMHSA) website, former assistant secretary Elinore McCance-Katz, MD, PhD, stated, “The entire approach [of fentanyl test strips] is based on the premise that a drug user poised to use a drug is making rational choices, is weighing pros and cons, and is thinking completely logically about his or her drug use. Based on my clinical experience, I know this could not be further from the truth.”

However, the research demonstrates the opposite. For example, in a 2018 study, drug users provided with FTS reported that receiving a positive test result was significantly associated with a positive change in overdose risk behavior (such as using more slowly, using less, throwing the batch away, or using with another person around). The overwhelming evidence supports the safety and ease of FTS use in the community and in outpatient and inpatient treatment settings.

The situation has worsened during the COVID-19 pandemic. Between October 2019 and October 2020, there was a 46 percent increase in overall overdose deaths from methamphetamine and other stimulants in the United States compared to the previous year; this increase has been linked to increases in fentanyl contamination. As another example, the Office of the Chief Medical Examiner in San Francisco reported that the city experienced more overdose deaths (699) than COVID-19 deaths (260) from January 2020 to December 2020, which was 59 percent greater than in 2019. If FTS had been available to even some of these individuals, we may have been able to prevent a portion of these deaths.

With COVID-19-related restrictions in place and widespread fears of virus exposure, maintenance therapies such as methadone and harm-reduction tools such as naloxone and clean needles have been more difficult to access, and many people have struggled with increased stress and anxiety. A staggering 13 percent of individuals surveyed in a Centers for Disease Control and Prevention (CDC) study reported new or increased use of substances during the pandemic; this kind of escalation of drug use might lead individuals to seek out their drug of choice with less discretion than normal, therefore supporting the need for greater access to FTS as a harm-reduction tool.

A Shifting Attitude Under The Biden Administration

On April 7, 2021, the CDC and the SAMHSA announced that federal funding can now, for the first time, be used to purchase FTS for research, clinical, or public health purposes. This comes about four months after a CDC Health Advisory Statement that addressed the need to “improve the detection of overdose outbreaks due to fentanyl, novel psychoactive substances (e.g., fentanyl analogs), or other drugs to facilitate an effective response.” They advised harm-reduction organizations to implement “drug checking services and drug supply surveillance in line with applicable state and local laws.”

The legality of drug checking, such as via FTS, still varies state to state. While some states still categorize such drug-checking items as illegal drug paraphernalia, other states—including New Mexico, Colorado, Rhode Island, and Maryland—have made efforts in the past few years to decriminalize such tools. Most recently, on May 18, 2021, Arizona Governor Doug Doucey signed into law a bill that legalizes FTS to the extent that they are now no longer considered drug paraphernalia in the state. The date marked the one-year anniversary of Arizona Senator Christine Marsh’s loss of her 25-year-old son to an accidental fentanyl overdose (Marsh sponsored the bill). Her hope, like ours, is that these tests will eventually be sold at more accessible locations for the lay public.

Decriminalization of FTS is a step toward reducing the stigma around PWUD, but it’s an uphill battle. Drug harm-reduction strategies have a long history of aversion within US society. Take naloxone, for example. The largest funder of addiction research, the National Institute on Drug Abuse, has long supported its utility in decreasing opioid-related mortality; however, like FTS, it remains a contentious weapon in the fight to end the opioid crisis across the United States, with some opponents arguing it will lead to increased substance use. Naloxone has been Food and Drug Administration (FDA)-approved for overdose reversals since the 1970s, yet its distribution has only been normalized over the past few years. Naloxone can now reach the hands of individuals through free-of-cost distribution across hospitals, school systems, and places of worship. The availability, however, may depend on whether or not an organization is willing to allocate their funds to purchase kits for free distribution or if the organization has made arrangements with their local governmental agency to be distributing centers. As an example, the New York City Department of Health has partnered with CVS and Walgreen pharmacies to make naloxone free to any New Yorker during the COVID-19 pandemic.

In some cases, however, naloxone might not be sufficient to reverse an overdose if fentanyl is present, given fentanyl’s high potency. Recognizing this concern, on April 30, 2021, the FDA approved a higher-dose naloxone nasal spray product, which carries eight milligrams of naloxone compared with the two and four milligrams of naloxone currently accessible to the public. However, it is unclear what the cost and availability of this new product will be. Currently, a single dose of naloxone can cost $75 out of pocket, preventing some of the most vulnerable populations from accessing this life-saving measure; given that, it is expected that the new naloxone product will be prohibitively expensive. We need cheaper and more accessible naloxone and harm-reduction tools—such as FTS—for those who might be at risk for overdosing, rather than a higher and more costly dose of an existing medication.

If society has begun to accept naloxone’s utility for preventing drug overdose and death, why aren’t we implementing a tool to prevent the overdose from happening in the first place? We cannot afford to wait decades for society to integrate FTS into our day-to-day lives. The greater availability of FTS, the greater the number of deaths we can prevent. FTS must be normalized at every party, available in social situations of drug use, and distributed in bathrooms at concerts or clubs. More health care organizations and hospital systems must take greater initiative in distributing FTS in their outpatient and inpatient settings, especially the emergency department, for those clinically indicated to benefit. More states should decriminalize FTS and recognize their ability to save lives.

We must collectively take a step back and evaluate the basis for preventing life-saving measures from being accessed in our communities. A critical component in defeating the opioid crisis is defeating long-standing stigma toward PWUD. Stigma toward PWUD and access to FTS bidirectionally affect one another: Stigma creates barriers to accessing harm-reduction tools, while removing barriers can reduce stigma. With efforts to combat stigma and increase access to FTS underway, including decriminalization and expanded funding for increased availability, we must now address the need for greater distribution channels, so that those who need it most can access it and remain empowered in their lifestyle choices.

Giselle Appel, Brenna Farmer, MD, and Jonathan Avery, MD, are employed by Weill Cornell Medical College, which is one of the top-ranked clinical and medical research centers in the country, dedicated to the tripartite mission of education, research, and patient care.