When it comes to addiction, Americans' word choices are part of the problem 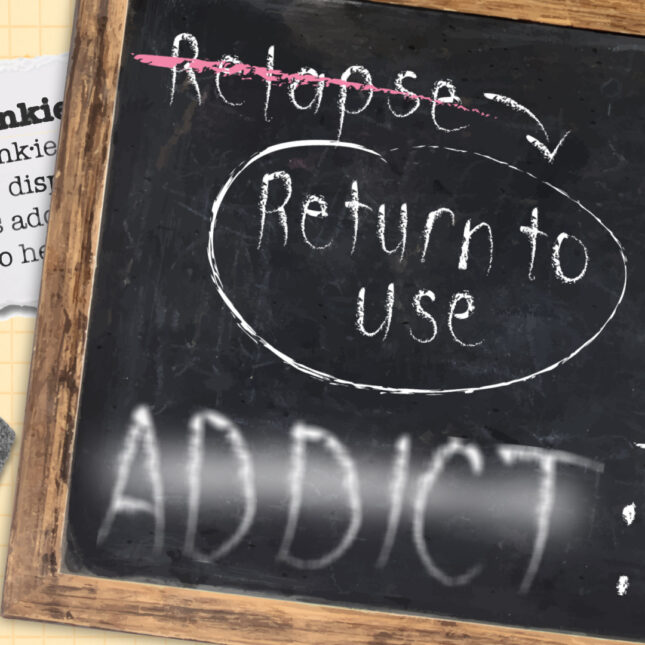 Who gets better medical care in the United States: “addicts,” or “people with substance use disorders”?

The terms, of course, mean functionally the same thing. But in the field of addiction medicine, the question presents something of a crisis. Even as drugs and alcohol claim 200,000 lives each year, many who seek addiction treatment are greeted by the harsh, stigmatizing labels that many Americans don’t think twice about: Words like addict, alcoholic, junkie, abuser, or worse.

Even as the nation’s substance use crisis has escalated, however, new research has emerged showing that simple word choices can have a big impact on the way health professionals view their patients and, accordingly, the care they receive. And in recent years, a coalition of doctors, recovery advocates, researchers, and even government officials has pushed to swap out stigmatizing terms like “addict” in favor of language that recognizes addiction as a medical condition — and acknowledges those who suffer from it as human beings.

“Words matter tremendously, and much of the language we use when we talk about addiction is very dissimilar from the language we use for other health conditions,” said Sarah Wakeman, the medical director of the Massachusetts General Hospital Substance Use Disorder Initiative. “Many of the words that are commonplace when talking about addiction are incredibly pejorative and stigmatizing.”

Advocates say that changing the country’s addiction vocabulary would represent a major step toward advancing compassion and evidence-based care — and, more broadly, advancing Americans’ understanding of addiction as a disease, not a moral failing.

The effort, they are quick to stress, is not just rooted in political correctness. Research shows that health workers who use terms like “substance abuser” or “addict,” as opposed to more neutral language, are more likely to exhibit bias against patients struggling with addiction.

“Language has an impact — it influences the way people feel, the way they think, the decisions they’re likely to make,” said Robert Ashford, a researcher who has written extensively about the language used in addiction-care settings. “We’re just asking people to modify the type of language they use so that we can set people up in our systems for success.”

So far, results have been mixed.

But other judgmental terminology remains pervasive, advocates say, including words as commonplace as “alcoholic” or “addict,” which they argue reduces people’s identity to the name of their medical condition.

Indeed, when it comes to language, the field of addiction medicine largely stands alone. Cancer patients are not referred to as cancers. People who experience strokes or heart attacks aren’t referred to by the name of their disease, either. The same is true even in the highly stigmatized world of mental health: People with depression are not depressives, and people with schizophrenia are no longer commonly referred to as schizophrenics.

Even terms as simple as “substance abuse,” advocates say, imply that people are always making willful, considered choices to consume drugs or alcohol, leveling a moral judgment against them instead of recognizing the medical reality of addiction.

“Relapse,” too, is out of vogue. Many researchers and clinicians now favor terms like “return to use” or “resumption of use,” saying that the former term can feel judgmental and that people often experience ups and downs in their recovery.

The use of “clean” to denote abstinence from drug use is also becoming less popular, largely because it implies people currently using drugs or alcohol are “dirty.”

“This isn’t about being politically correct, it’s not about being nice or polite,” said Michael Botticelli, the former director of the White House Office of National Drug Control Policy who wrote a 2017 memo directing federal agencies to use more neutral language when referring to people with addiction. “Our language really colors how we think about people, and colors policy.”

Even the everyday terminology of addiction medicine is out of step with that of other specialities, many doctors argue. One pillar of addiction care, Wakeman said, is fundamentally mislabeled: medication-assisted treatment, or the practice of prescribing drugs like methadone or buprenorphine to reduce opioid cravings and withdrawal symptoms.

Patients who take methadone and buprenorphine are 59% and 38% less likely to die of overdose, respectively, than those not prescribed medication — meaning that in the context of almost any other epidemic, they’d be seen as extraordinarily effective.

“‘Medication-assisted treatment’ implies that medication is not treatment in its own right, and that it’s a corollary to something else, when in fact we know that medication is incredibly effective and saves lives,” Wakeman said. “We don’t talk about insulin-assisted diabetes treatment, or chemotherapy-assisted cancer treatment. So to just use language as we would with any other condition is a good litmus test.”

Some doctors now use terms like “medications for opioid use disorder” or “pharmacotherapy,” though the term “medication-assisted treatment” is still commonly used in official government language and in research papers.

Yet even within their own field, doctors seeking to change the vocabulary of addiction face an uphill battle.

“Those that use the most stigmatizing language, and also have the strongest negative associations [about people with substance use disorders], are health care professionals,” Ashford said. “There are no ifs, ands, or buts about it. It prevents opportunities to have meaningful conversations about getting help, because nobody wants to put themselves in a situation where they’ll be further discriminated against.”

There’s at least one community in which terms like “addict” and “alcoholic” are commonplace: People with substance use disorders, or people in recovery.

In particular, some people who participate in peer support groups like Alcoholics Anonymous or Narcotics Anonymous have at least partially “reclaimed” the terms. It’s not uncommon, either, for patients in addiction-treatment settings and other people who use drugs to refer to themselves as addicts — a choice that experts say health workers should respect but not necessarily emulate.

“When you’re a member of a community, you have certain liberties in terms of what you call yourself, and those liberties are not extended, necessarily, to other people,” said Botticelli, who was the first ONDCP director to identify as a person in recovery.

Even within the recovery community, however, it’s a sensitive topic. While some use the terms proudly, others have cautioned that even though people in recovery are free to refer to themselves however they like, using terms like “addict” or “alcoholic” can still take a toll.

One Alcoholics Anonymous chapter even added a page to its website in 2020 addressing the concerns of those who don’t wish to introduce themselves with the now-famous line: Their name, followed by “and I’m an alcoholic.”

“Even with that reclamation, there’s a level of internalized stigma and shame which does impact people’s sense of self-worth, which is directly associated with whether they believe they’re worth helping or can recover,” Ashford said.

Most institutions have been slow to change: Phrases like “opioid addicts” still regularly appear on major news sites like the Washington Post and Wall Street Journal, though the New York Times appears to have mostly moved toward the comparatively neutral term “drug users.”

Another large exception is the Associated Press, which in 2017 cautioned its reporters against using terms like “addict” or “abuser” — largely in response to research by John Kelly, a Harvard psychiatry professor and frequent collaborator of Ashford and Wakeman.

Efforts to change the names date back over 15 years — the first bill introduced in Congress, in fact, was authored in 2007 by Senator Joe Biden of Delaware.

“The pejorative term ‘abuse’ used in connection with diseases of addiction has the adverse effect of increasing social stigma and personal shame, both of which are so often barriers to an individual’s decision to seek treatment,” Biden wrote then.

With Biden now serving as president, there have been more signs of change: This year, for the first time, the White House proposed changing NIDA’s name to the National Institute on Drugs and Addiction, and changing the word “abuse” in SAMHSA’s name to “use.”

Lawmakers from the House and Senate included the changes in spending bills for 2023, but Congress has failed to reach agreement on a final version — meaning that for now, the agencies’ names remain the same.

“We’ve come a pretty significant way in a short period,” Botticelli said. “But I still think there’s a long way to go — it’s still indicative of the level of stigma we have in our society.”

10 Tips to Combat Substance Use during the Holidays

A challenge that often appears this time of the year is increased substance use during the holiday season. The holidays can be exhausting and stressful which can trigger mental health challeng…

Research Shows the Power of Peers in Recovery

People with opioid use disorder (OUD) are nearly 30% more likely to stick to their treatment plan when they’re paired with someone who has experienced similar challenges, aka a peer rec…